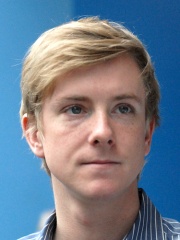 Chris Hughes (born November 26, 1983) is an American entrepreneur who co-founded and served as spokesman for the online social directory and networking site Facebook, with Harvard roommates Mark Zuckerberg, Dustin Moskovitz, Eduardo Saverin, and Andrew McCollum. He was the publisher and editor-in-chief of The New Republic from 2012 to 2016. As of 2019 Hughes is a co-chair of the Economic Security Project. Read more on Wikipedia

Since 2007, the English Wikipedia page of Chris Hughes has received more than 2,558,977 page views. His biography is available in 30 different languages on Wikipedia making him the 397th most popular businessperson.