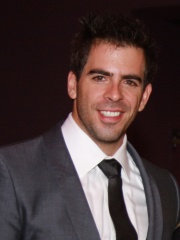 Eli Raphael Roth (born April 18, 1972) is an American film director, producer, editor, writer, and actor. As a director and producer, he is most closely associated with the horror genre, first coming to prominence for directing the films Cabin Fever (2003) and Hostel (2005). Roth continued to work in the horror genre, directing the films Hostel: Part II (2007) and The Green Inferno (2013). Read more on Wikipedia

Since 2007, the English Wikipedia page of Eli Roth has received more than 5,030,334 page views. His biography is available in 29 different languages on Wikipedia making him the 749th most popular film director.