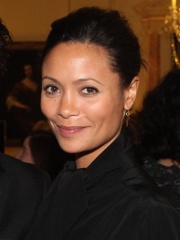 Melanie Thandiwe Newton Parker ( tan-DEE-way; born 6 November 1972), is an English actress. She has received various awards including a Primetime Emmy Award and a British Academy Film Award, in addition to nominations for two Golden Globe Awards. Newton is known for starring roles such as the title character in Beloved (1998), Nyah Nordoff-Hall in Mission: Impossible 2 (2000), Christine in Crash (2004), for which she received a BAFTA Award for Best Actress in a Supporting Role, Linda in The Pursuit of Happyness (2006), Stella in RockNRolla (2008), Condoleezza Rice in W. Read more on Wikipedia