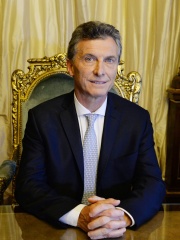 Mauricio Macri (Spanish pronunciation: [mawˈɾisjo ˈmakɾi]; born 8 February 1959) is an Argentine businessman and politician who served as the President of Argentina from 2015 to 2019. He has been the leader of the Republican Proposal (PRO) party since its founding in 2005. He previously served as 5th Chief of Government of Buenos Aires from 2007 to 2015, and was a member of the Chamber of Deputies representing Buenos Aires from 2005 to 2007. Read more on Wikipedia

Among politicians, Mauricio Macri ranks 4,667 out of 15,710. Before him are Gustav Noske, Khamtai Siphandon, Amenemnisu, Lê Lợi, Lansana Conté, and Ferdinand Charles, Archduke of Austria. After him are Matilda of Boulogne, Labashi-Marduk, Lucius Domitius Ahenobarbus, Al-Muktafi, Hannibalianus, and Charles Michel.