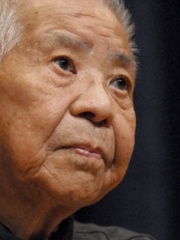 Tsutomu Yamaguchi (山口 彊, Yamaguchi Tsutomu) (16 March 1916 – 4 January 2010) was a Japanese marine engineer and a survivor of both the Hiroshima and Nagasaki atomic bombings during World War II. Although at least 70 people are known to have been affected by both bombings, he is the only person to have been officially recognized by the government of Japan as surviving both explosions.A resident of Nagasaki, Yamaguchi was in Hiroshima on business for his employer Mitsubishi Heavy Industries when the city was bombed at 8:15 AM, on 6 August 1945. He returned to Nagasaki the following day and, despite his wounds, he returned to work on 9 August the day of the second atomic bombing. That morning, while he was being told by his supervisor that he was "crazy" after describing how one bomb had destroyed the city, the Nagasaki bomb detonated. Read more on Wikipedia

Tsutomu Yamaguchi was most famous for being the only person to survive the atomic bombing of Hiroshima and Nagasaki.

Among ENGINEERS In Japan