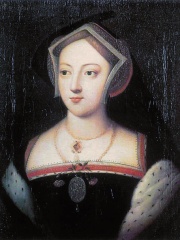 Mary Boleyn, also known as Lady Mary (c. 1499 – 19 July 1543), was the sister of English queen consort Anne Boleyn, whose family enjoyed considerable influence during the reign of King Henry VIII. Mary was one of the mistresses of Henry VIII for an unknown period of time. It has been rumoured that she bore two of the king's children, though Henry did not acknowledge either of them as he had acknowledged Henry FitzRoy, his son by another mistress, Elizabeth Blount. Read more on Wikipedia

Mary Boleyn is most famous for being the sister of Anne Boleyn, who was the second wife of King Henry VIII.

Among companions, Mary Boleyn ranks 16 out of 687. Before her are Eva Braun, Khadija bint Khuwaylid, Marie Louise, Duchess of Parma, Jacqueline Kennedy Onassis, Madame de Pompadour, and Mihrimah Sultan. After her are Roxana, Lucretia, Nefertari, Ankhesenamun, Nurbanu Sultan, and Messalina.