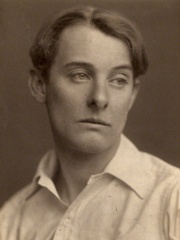 Lord Alfred Bruce Douglas (22 October 1870 – 20 March 1945), also known as Bosie Douglas, was an English poet and journalist, and a lover of Oscar Wilde. At Oxford he edited an undergraduate journal, The Spirit Lamp, that carried a homoerotic subtext, and met Wilde, starting a close but stormy relationship. Douglas's father, the Marquess of Queensberry, abhorred it and set out to humiliate Wilde, publicly accusing him of homosexuality. Read more on Wikipedia

Among writers, Lord Alfred Douglas ranks 1,399 out of 5,755. Before him are Ihara Saikaku, Hartmann Schedel, Elizabeth of the Trinity, Pehr Henrik Ling, Hieronymus of Cardia, and Marcus Garvey. After him are A. E. van Vogt, Philippe Soupault, Martin Gardner, Colin Dexter, Matthew Lewis, and Gavrila Derzhavin.