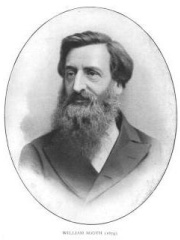 William Booth (10 April 1829 – 20 August 1912) was an English Methodist preacher who, along with his wife, Catherine, founded The Salvation Army and became its first General (1878–1912). The Christian movement with a quasi-military structure and government founded in 1865 has spread from London, England, to many parts of the world and is known for being one of the largest distributors of humanitarian aid. Read more on Wikipedia

Since 2007, the English Wikipedia page of William Booth has received more than 519,471 page views. His biography is available in 34 different languages on Wikipedia making him the 836th most popular religious figure.

Among religious figures, William Booth ranks 835 out of 2,001. Before him are Maron, 11th Dalai Lama, Theodore Stratelates, Sergius of Radonezh, Mary of Jesus de León y Delgado, and Carlos Filipe Ximenes Belo. After him are Veronica Giuliani, Didymus the Blind, Humbert of Silva Candida, Eusebius of Nicomedia, Conrad Schumann, and Anastasius of Persia.