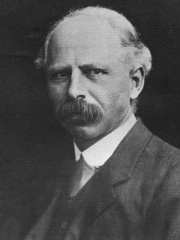 Leonard Trelawny Hobhouse (8 September 1864 – 21 June 1929) was a British liberal political theorist and sociologist, who has been considered one of the leading and earliest proponents of social liberalism. His works, culminating in his famous book Liberalism (1911), occupy a seminal position within the canon of New Liberalism. He worked both as an academic and a journalist, and played a key role in the establishment of sociology as an academic discipline; in 1907 he shared, with Edward Westermarck, the distinction of being the first professor of sociology to be appointed in the United Kingdom, at the University of London. Read more on Wikipedia

Since 2007, the English Wikipedia page of Leonard Hobhouse has received more than 60,831 page views. His biography is available in 19 different languages on Wikipedia making him the 22nd most popular political scientist.