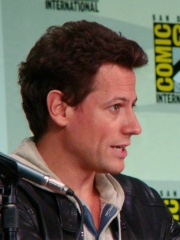 Ioan Gruffudd (Welsh: [ˈjɔan ˈɡrɪfɪð] (listen); born 6 October 1973) is a Welsh actor. He first came to public attention as Fifth Officer Harold Lowe in Titanic (1997), and then for his portrayal of Horatio Hornblower in the Hornblower series of television films (1998–2003). Subsequent roles have included Lancelot in King Arthur (2004), Reed Richards/Mister Fantastic in Fantastic 4 (2005) and its sequel (2007), William Wilberforce in Amazing Grace (2006), and Tony Blair in W. Read more on Wikipedia

Since 2007, the English Wikipedia page of Ioan Gruffudd has received more than 4,546,272 page views. His biography is available in 36 different languages on Wikipedia making him the 2,415th most popular actor.