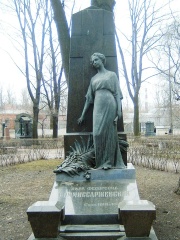 Vera Fyodorovna Komissarzhevskaya (Russian: Ве́ра Фё́доровна Комиссарже́вская; 8 November 1864 – 23 February 1910) was one of the most celebrated actresses and theatre managers of the late Russian Empire. She made her professional debut in 1893, after having acted as an amateur at Constantin Stanislavsky's Society of Art and Literature. She is probably best known today for originating the role of Nina in the ill-fated premiere of Anton Chekhov's The Seagull, at the Alexandrinsky Theatre in Saint Petersburg in 1896. Read more on Wikipedia

Since 2007, the English Wikipedia page of Vera Komissarzhevskaya has received more than 29,642 page views. Her biography is available in 16 different languages on Wikipedia making her the 3,574th most popular writer.