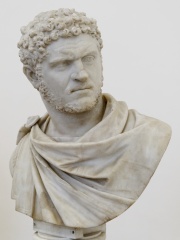 Marcus Aurelius Antoninus "Caracalla" (; born Lucius Septimius Bassianus, 4 April 188 – 8 April 217) was Roman emperor from 198 to 217. He was a member of the Severan dynasty, the elder son of Emperor Septimius Severus and Empress Julia Domna. Proclaimed co-ruler by his father in 198, he continued to reign with his brother Geta, co-emperor from 209, after their father's death in 211. Read more on Wikipedia

Caracalla was most famous for the Edict of Caracalla, which granted Roman citizenship to all free men in the Roman Empire.

Page views of Caracallas by language

Among politicians, Caracalla ranks 192 out of 15,577. Before him are Joseph II, Holy Roman Emperor, Salman of Saudi Arabia, Donald Trump, Leonidas I, Jawaharlal Nehru, and Louis the Pious. After him are Salvador Allende, Klemens von Metternich, Titus, Edward IV of England, Mohammad Reza Pahlavi, and Pargalı Ibrahim Pasha.