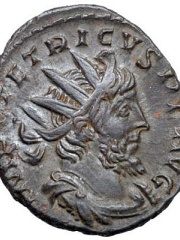 Gaius Pius Esuvius Tetricus was the emperor of the Gallic Empire from 271 to 274. He was originally the praeses (governor) of Gallia Aquitania, and became emperor after the murder of Emperor Victorinus in 271, after receiving the support of Victorinus's mother Victoria. During his reign, he faced external pressure from Germanic raiders, who pillaged the eastern and northern parts of his empire, and the Roman Empire, from which the Gallic Empire had seceded. Read more on Wikipedia

Since 2007, the English Wikipedia page of Tetricus I has received more than 102,153 page views. His biography is available in 33 different languages on Wikipedia making him the 2,400th most popular politician.

Page views of Tetricus IS by language

Among politicians, Tetricus I ranks 2,384 out of 14,801. Before him are Emperor Kōshō, Ferdinando II de' Medici, Grand Duke of Tuscany, Smendes, Chlodwig, Prince of Hohenlohe-Schillingsfürst, Ammar ibn Yasir, and Sancho II of Portugal. After him are Maria Luisa of Spain, Gabriel Bethlen, Sverker I of Sweden, Victor Amadeus I, Duke of Savoy, Louis Philippe I, Duke of Orléans, and Walter Hallstein.