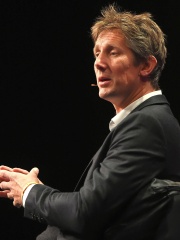 Edwin van der Sar (Dutch pronunciation: [ˈɛtʋɪɱ vɑn dər ˈsɑr] (listen); born 29 October 1970) is a Dutch football executive and former professional player who is currently the chief executive of AFC Ajax, with whom he began his senior playing career in the early 1990s; he is considered to be a member of the club's golden generation and was part of the Ajax team that won the UEFA Champions League in 1995. A goalkeeper, he left Ajax for Juventus in 1999, where he spent two years before moving to England, first to Fulham and then to Manchester United in 2005. There he won a second Champions League title in 2008, making him one of just eight players at the time to have won the competition with more than one club. Read more on Wikipedia

Edwin van der Sar is most famous for being the goalkeeper for the Dutch national team and Manchester United.