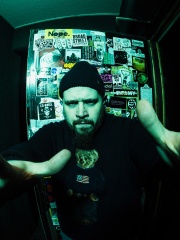 Vincenzo Luvineri (born October 5, 1977), better known as Vinnie Paz (formerly known as Ikon the Verbal Hologram), is a Sicilian American rapper and the lyricist behind the Philadelphia underground hip hop group Jedi Mind Tricks. He is also the frontman of the hip hop collective Army of the Pharaohs.He released his first solo album, Season of the Assassin in 2010. This was 18 years after Paz had originally started rapping. Read more on Wikipedia

Since 2007, the English Wikipedia page of Vinnie Paz has received more than 938,259 page views. His biography is available in 15 different languages on Wikipedia. Vinnie Paz is the 2,609th most popular singer (down from 2,384th in 2019).