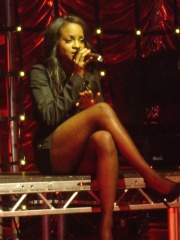 Keisha Kerreece Fayeanne Buchanan (; born 30 September 1984) is a British singer and a founding member of the girl group Sugababes alongside Mutya Buena and Siobhán Donaghy. With the Sugababes, she had six number one singles and two number one studio albums, making them one of the most successful British pop acts of the 21st century. Read more on Wikipedia

Among singers, Keisha Buchanan ranks 2,872 out of 3,541. Before her are Logic, Arilena Ara, Sondre Lerche, Kirk Franklin, Blanche, and Dmitry Koldun. After her are Kaori Iida, Jimmie Wilson, Twista, Hitomi Yoshizawa, Yohio, and Miwa.