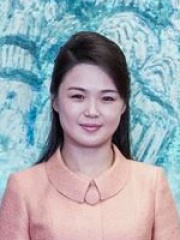 Ri Sol-ju (Korean: 리설주; Hanja: 李雪主; born c. 1985–89) is the First Lady of North Korea and wife of North Korean Supreme Leader Kim Jong-un.Little is known about her from official North Korean sources but outside sources have speculated more about her background. She has appeared numerous times in public with her husband. Read more on Wikipedia

Since 2007, the English Wikipedia page of Ri Sol-ju has received more than 4,727,194 page views. Her biography is available in 32 different languages on Wikipedia making her the 542nd most popular companion.

Among companions, Ri Sol-ju ranks 548 out of 586. Before her are Théodrate of Troyes, Tranquillina, Eleanor of England, Countess of Bar, Mary Anne MacLeod Trump, Meresankh I, and Liutgard of Saxony. After her are Matilda of Holstein, Gilbert, Duke of Lorraine, Goiswintha, Blanca of Navarre, Queen of Castile, Iset Ta-Hemdjert, and Mariniana.

Among COMPANIONS In North Korea