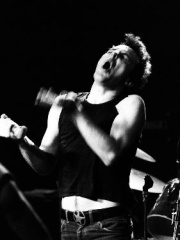 Eric Reed Boucher (born June 17, 1958), better known by his professional name Jello Biafra, is an American singer, musician, and spoken word artist. He is the former lead singer and songwriter for the San Francisco punk rock band Dead Kennedys. Initially active from 1979 to 1986, Dead Kennedys were known for rapid-fire music topped with Biafra's sardonic lyrics and biting social commentary, delivered in his "unique quiver of a voice." When the band broke up in 1986, he took over the influential independent record label Alternative Tentacles, which he had founded in 1979 with Dead Kennedys bandmate East Bay Ray. Read more on Wikipedia

Since 2007, the English Wikipedia page of Jello Biafra has received more than 1,766,407 page views. His biography is available in 25 different languages on Wikipedia making him the 926th most popular singer.