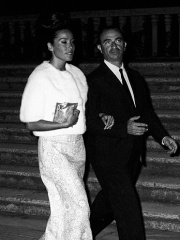 Natalya Utevlevna Arinbasarova (Russian: Наталья Утевлевна Аринбасарова, Kazakh: Наталья Өтеуліқызы Орынбасарова; born 24 September 1946 in Moscow) is a Russian actress. She appeared in more than thirty films since 1965. From 1966 to 1969 she was married to director Andrei Konchalovsky and gave birth to a son Yegor who later also became a prominent film director. Read more on Wikipedia

Since 2007, the English Wikipedia page of Natalya Arinbasarova has received more than 27,344 page views. Her biography is available in 15 different languages on Wikipedia making her the 4,792nd most popular actor.