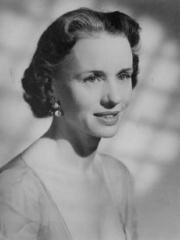 Jessie Alice Tandy (7 June 1909 – 11 September 1994) was an English-American actress. Tandy appeared in over 100 stage productions and had more than 60 roles in film and TV, receiving such accolades as an Academy Award, four Tony Awards, a BAFTA, a Golden Globe Award, and a Primetime Emmy Award.Born in London, she was only 18 when she made her professional debut on the London stage in 1927. During the 1930s, she acted in many plays in London's West End, playing roles such as Ophelia (opposite John Gielgud's legendary Hamlet) and Katherine (opposite Laurence Olivier's Henry V).During this period, she also worked in a number of British films. Read more on Wikipedia

Since 2007, the English Wikipedia page of Jessica Tandy has received more than 2,718,553 page views. Her biography is available in 54 different languages on Wikipedia making her the 467th most popular actor.