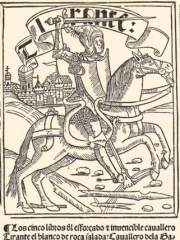 Joanot Martorell (Valencian: [dʒuaˈnɔd maɾtoˈɾeʎ]; c. 1410 – 1465) was a Valencian knight and writer, best-known for authoring the novel Tirant lo Blanch, written in Valencian and published at Valencia in 1490. This novel is often regarded as one of the peaks of the literature in Catalan language and it played a major role in influencing later writers such as Miguel de Cervantes, who, in the book burning scene of Don Quixote, says "I swear to you, my friend, this (Tirant lo Blanch) is the best book of its kind in the world". Read more on Wikipedia

Among people born in 1415, Joanot Martorell ranks 7. Before him are Piero della Francesca, Frederick III, Holy Roman Emperor, Dieric Bouts, Vasily II of Moscow, Cecily Neville, Duchess of York, and Jan Długosz. After him are Jacquetta of Luxembourg, Albert van Ouwater, John Argyropoulos, Aristotele Fioravanti, and Afonso Gonçalves Baldaia. Among people deceased in 1465, Joanot Martorell ranks 5. Before him are Charles, Duke of Orléans, Thomas Palaiologos, Louis, Duke of Savoy, and Isabella of Bourbon. After him is Isabella of Clermont.