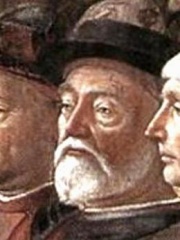 John Argyropoulos (Greek: Ἰωάννης Ἀργυρόπουλος Ioannis Argyropoulos; Italian: Giovanni Argiropulo; surname also spelt Argyropulus, or Argyropulos, or Argyropulo; c. 1415 – 26 June 1487) was a lecturer, philosopher and humanist, one of the émigré Greek scholars who pioneered the revival of Classical learning in 15th-century Italy.He translated Greek philosophical and theological works into Latin besides producing rhetorical and theological works of his own. Read more on Wikipedia

Since 2007, the English Wikipedia page of John Argyropoulos has received more than 61,786 page views. His biography is available in 21 different languages on Wikipedia making him the 797th most popular philosopher.

Among people born in 1415, John Argyropoulos ranks 10. Before him are Vasily II of Moscow, Cecily Neville, Duchess of York, Joanot Martorell, Jan Długosz, Albert van Ouwater, and Jacquetta of Luxembourg.  Among people deceased in 1487, John Argyropoulos ranks 6. Before him are Chenghua Emperor, Mara Branković, Nicholas of Flüe, Marie of Cleves, Duchess of Orléans, and Charlotte, Queen of Cyprus. After him are Tlacaelel and Hayder of Crimea.