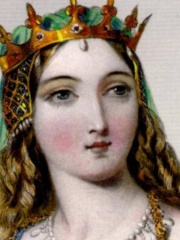 Jacquetta of Luxembourg, Countess Rivers (1415/16 – 30 May 1472) was the eldest daughter of Peter I of Luxembourg, Count of Saint-Pol, Conversano and Brienne, and his wife Margaret of Baux (Margherita del Balzo of Andria). She was a prominent, though often overlooked, figure in the Wars of the Roses. Through her short-lived first marriage to the Duke of Bedford, brother of King Henry V, she was firmly allied to the House of Lancaster. Read more on Wikipedia

Since 2007, the English Wikipedia page of Jacquetta of Luxembourg has received more than 916,386 page views. Her biography is available in 15 different languages on Wikipedia making her the 450th most popular nobleman.

Page views of Jacquetta of Luxembourgs by language

Among noblemen, Jacquetta of Luxembourg ranks 472 out of 559. Before her are Leka, Crown Prince of Albania, Matteo II Visconti, Boniface, Count of Savoy, Matthew, Count of Boulogne, Princess Madeleine, Duchess of Hälsingland and Gästrikland, and Dorothea of Denmark, Electress Palatine. After her are John William III, Duke of Saxe-Eisenach, Corbinian, Prince Harry, Duke of Sussex, William Louis, Duke of Württemberg, Princess Maria Anna of Saxony, and Princess Louise of Denmark.