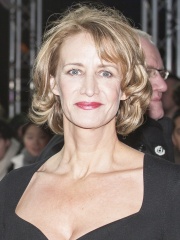 Janet McTeer (born 5 August 1961) is an English actress. She began her career training at the Royal Academy of Dramatic Art before earning acclaim for playing diverse roles on stage and screen in both period pieces and modern dramas. She's received numerous accolades including a Tony Award, a Olivier Award, a Golden Globe Award, and nominations for an Academy Award and Primetime Emmy Award. Read more on Wikipedia

Among actors, Janet McTeer ranks 3,639 out of 9,996. Before her are Björn Granath, Leighton Meester, Yunjin Kim, Stella McCartney, Johnny Knoxville, and Bradford Dillman. After her are Ben Mendelsohn, Lee Meriwether, Matthias Schweighöfer, Will Rogers, Theo James, and Mark Addy.