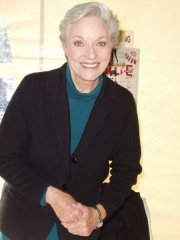 Lee Ann Meriwether (born May 27, 1935) is an American actress, former model, and the winner of the Miss America 1955 pageant. She has appeared in many films and television shows including as Betty Jones, Buddy Ebsen's secretary and daughter-in-law in the 1970s crime drama Barnaby Jones. The role earned her two Golden Globe Award nominations in 1975 and 1976, and an Emmy Award nomination in 1977. Read more on Wikipedia

Among actors, Lee Meriwether ranks 3,641 out of 9,996. Before her are Yunjin Kim, Stella McCartney, Johnny Knoxville, Bradford Dillman, Janet McTeer, and Ben Mendelsohn. After her are Matthias Schweighöfer, Will Rogers, Theo James, Mark Addy, Paul Meurisse, and Warren Clarke.