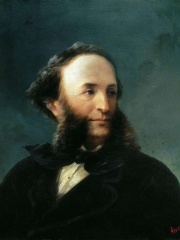 Ivan Konstantinovich Aivazovsky (Russian: Иван Константинович Айвазовский; 29 July 1817 – 2 May 1900) was a Russian Romantic painter who is considered one of the greatest masters of marine art. Baptized as Hovhannes Aivazian, he was born into an Armenian family in the Black Sea port of Feodosia in Crimea and was mostly based there. Following his education at the Imperial Academy of Arts in Saint Petersburg, Aivazovsky traveled to Europe and lived briefly in Italy in the early 1840s. Read more on Wikipedia

Ivan Aivazovsky is most famous for his paintings of the sea and seascapes.

Among people born in 1817, Ivan Aivazovsky ranks 4. Before him are Henry David Thoreau, Theodor Mommsen, and Bahá'u'lláh. After him are William III of the Netherlands, Louise of Hesse-Kassel, Adolphe, Grand Duke of Luxembourg, Charles-François Daubigny, Archduke Albrecht, Duke of Teschen, Syed Ahmad Khan, Niels Gade, and Princess Clémentine of Orléans. Among people deceased in 1900, Ivan Aivazovsky ranks 7. Before him are Friedrich Nietzsche, Oscar Wilde, Gottlieb Daimler, Max Müller, Wilhelm Steinitz, and Umberto I of Italy. After him are John Ruskin, Étienne Lenoir, Vladimir Solovyov, Alfred, Duke of Saxe-Coburg and Gotha, John Sherman, and Wilhelm Liebknecht.

Among PAINTERS In Ukraine