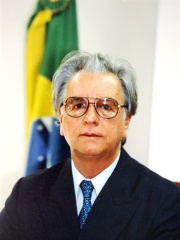 Itamar Augusto Cautiero Franco (Portuguese pronunciation: [itaˈmaʁ awˈgustu kawtʃiˈeɾu ˈfɾɐ̃ku]; 28 June 1930 – 2 July 2011) was a Brazilian politician who served as the 33rd president of Brazil from 29 December 1992 to 31 December 1994. Previously, he was the 21st vice president of Brazil from 1990 until the resignation of President Fernando Collor de Mello. During his long political career Franco also served as Senator, Mayor, Ambassador and Governor. Read more on Wikipedia

Itamar Franco was a Brazilian politician and economist who served as the 33rd President of Brazil from December 1992 to January 1995.

Among politicians, Itamar Franco ranks 4,917 out of 15,577. Before him are Archduke Charles Stephen of Austria, Antonio Segni, Princess Elisabeth of Thurn and Taxis, Alaungpaya, Grand Duke George Mikhailovich of Russia, and Hakor. After him are Friedrich Wilhelm von Seydlitz, García Ramírez of Navarre, Alexander Rutskoy, Sergio Oliva, Grifo, and Catherine of Bosnia.