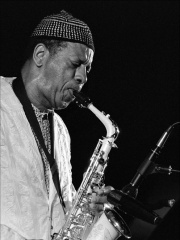 Randolph Denard Ornette Coleman (March 9, 1930 – June 11, 2015) was an American jazz saxophonist, violinist, trumpeter, and composer known as a principal founder of the free jazz genre, a term derived from his 1960 album Free Jazz: A Collective Improvisation. His pioneering performances often abandoned the chordal and harmony-based structure found in bebop, instead emphasizing a jarring and avant-garde approach to improvisation.Born in Fort Worth, Texas, Coleman began his musical career playing in local R&B and bebop groups, and eventually formed his own group in Los Angeles featuring members such as Ed Blackwell, Don Cherry, Charlie Haden, and Billy Higgins. In 1959, he released the controversial album The Shape of Jazz to Come and began a long residency at the Five Spot jazz club in New York City. Read more on Wikipedia

Among musicians, Ornette Coleman ranks 285 out of 2,662. Before him are Per Gessle, Clara Haskil, Alan Parsons, Will.i.am, Dave Mustaine, and Tiësto. After him are Igor Oistrakh, Sixto Rodriguez, Eric Carr, Charles Mingus, PJ Harvey, and Manu Dibango.