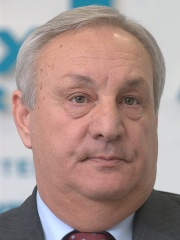 Sergei Uasyl-ipa Bagapsh (Abkhazian: Сергеи Уасыл-иҧа Багаҧшь, Georgian: სერგეი ბაგაფში, Russian: Сергей Васильевич Багапш; 4 March 1949 – 29 May 2011) was the second President of the Republic of Abkhazia. He was Prime Minister from 1997 to 1999 and was later elected as President in 2005. He was re-elected in the 2009 presidential election. Read more on Wikipedia

Since 2007, the English Wikipedia page of Sergei Bagapsh has received more than 58,281 page views. His biography is available in 50 different languages on Wikipedia making him the 6,750th most popular politician.

Among politicians, Sergei Bagapsh ranks 6,709 out of 14,801. Before him are William I, Count of Holland, Pascoal Ranieri Mazzilli, Annegret Kramp-Karrenbauer, Hosokawa Gracia, Ivan Asen III of Bulgaria, and Wo Ding. After him are Charles Emmanuel, Prince of Carignano, Christian III, Count Palatine of Zweibrücken, Prince Adolphus, Duke of Cambridge, Quintus Petillius Cerialis, Nikolay Pavlovich Ignatyev, and Eduardo Mondlane.