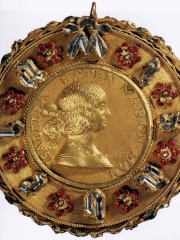 Isabella d'Este (19 May 1474 – 13 February 1539) was Marchioness of Mantua and one of the leading women of the Italian Renaissance as a major cultural and political figure. She was a patron of the arts as well as a leader of fashion, whose innovative style of dressing was copied by women throughout Italy and at the French court. The poet Ariosto labeled her as the "liberal and magnanimous Isabella", while author Matteo Bandello described her as having been "supreme among women". Read more on Wikipedia

Among noblemen, Isabella d'Este ranks 124 out of 843. Before her are Pyotr Wrangel, Ramesses VII, Prince Vincent of Denmark, Chlodomer, Queen Fabiola of Belgium, and Avidius Cassius. After her are Leopold III, Duke of Austria, Grand Duke Sergei Alexandrovich of Russia, Princess Augusta of Bavaria, Miguel I of Portugal, Béla II of Hungary, and Grand Duchess Maria Alexandrovna of Russia.