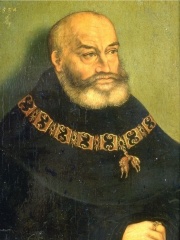 George the Bearded, Duke of Saxony (Meissen, 27 August 1471 – Dresden, 17 April 1539), was Duke of Saxony from 1500 to 1539 known for his opposition to the Reformation. While the Ernestine line embraced Lutheranism, the Albertines (headed by George) were reluctant to do so. Despite George's efforts to avoid a succession by a Lutheran upon his death in 1539, he could not prevent it from happening. Read more on Wikipedia

Page views of George, Duke of Saxonies by language

Among noblemen, George, Duke of Saxony ranks 266 out of 843. Before him are Duchess Sophia Frederica of Mecklenburg-Schwerin, Luisa of Naples and Sicily, Saint Margaret of Scotland, Madeleine of Valois, Archduchess Elisabeth Franziska of Austria, and Prince Xavier of Bourbon-Parma. After him are Frederick II Eugene, Duke of Württemberg, Afonso, Prince of Portugal, César, Duke of Vendôme, Princess Sophie of Saxony, Theobald III, Count of Champagne, and Stephen, Count of Blois.

Among noblemen born in Germany, George, Duke of Saxony ranks 36. Before him are Louis II, Duke of Bavaria (1229), Bruno the Great (925), Hedvig Elisabeth Charlotte of Holstein-Gottorp (1759), Princess Mary Adelaide of Cambridge (1833), Princess Cecilie of Baden (1839), and Duchess Sophia Frederica of Mecklenburg-Schwerin (1758). After him are Frederick II Eugene, Duke of Württemberg (1732), Princess Sophie of Saxony (1845), Christian Albert, Duke of Holstein-Gottorp (1641), Duchess Helene of Mecklenburg-Schwerin (1814), John Casimir, Count Palatine of Kleeburg (1589), and Ernest Augustus, Crown Prince of Hanover (1845).