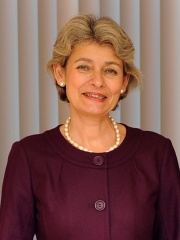 Irina Georgieva Bokova (Bulgarian: Ирина Георгиева Бокова; born 12 July 1952) is a Bulgarian politician and the former Director-General of UNESCO (2009–2017). During her political and diplomatic career in Bulgaria, she served, among others, two terms as a member of the National parliament, and deputy minister of foreign affairs and minister of foreign affairs ad interim under Prime Minister Zhan Videnov. She also served as Bulgaria's ambassador to France and to Monaco, and was Bulgaria's Permanent Delegate to UNESCO. Bokova was also the personal representative of Bulgaria's President to the Organisation internationale de la Francophonie (2005–2009).On 15 November 2009, she took office as the ninth Director-General of UNESCO, marking two firsts: she became both the first female and the first Southeastern European to head the agency. Read more on Wikipedia

Among DIPLOMATS In Bulgaria