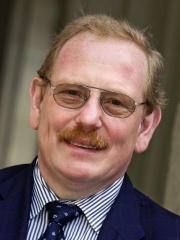 Reinhard Genzel (German pronunciation: [ˈʁaɪnhaʁt ˈɡɛntsl̩] (listen); born 24 March 1952) is a German astrophysicist, co-director of the Max Planck Institute for Extraterrestrial Physics, a professor at LMU and an emeritus professor at the University of California, Berkeley. He was awarded the 2020 Nobel Prize in Physics "for the discovery of a supermassive compact object at the centre of our galaxy", which he shared with Andrea Ghez and Roger Penrose. In a 2021 interview given to Federal University of Pará in Brazil, Genzel recalls his journey as a physicist; the influence of his father, Ludwig Genzel; his experiences working with Charles H. Read more on Wikipedia