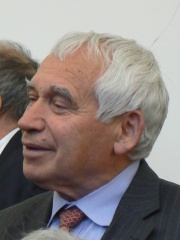 Zhelyu Mitev Zhelev (Bulgarian: Желю Митев Желев; 3 March 1935 – 30 January 2015) was a Bulgarian politician and former dissident who served as the first non-Communist President of Bulgaria from 1990 to 1997. Zhelev was one of the most prominent figures of the 1989 Bulgarian Revolution, which ended the 35 year rule of President Todor Zhivkov. A member of the Union of Democratic Forces, he was elected as President by the 7th Grand National Assembly. Read more on Wikipedia

Among politicians, Zhelyu Zhelev ranks 5,129 out of 15,577. Before him are Philip I, Prince of Taranto, Brahim Ghali, Louis François, Prince of Conti, Radama I, Konstanty Ostrogski, and Salvador Sánchez Cerén. After him are Prince Amedeo, Duke of Aosta, Wei Zheng, Emperor Zhi of Han, Andrew, Duke of Calabria, Yaropolk II of Kiev, and Chungnyeol of Goryeo.