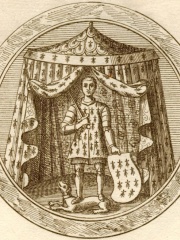 John V, sometimes numbered as VI, (24 December 1389 – 29 August 1442) bynamed John the Wise (Breton: Yann ar Fur ; French: Jean le Sage), was Duke of Brittany and Count of Montfort from 1399 to his death. His rule coincided with the height of the Hundred Years' War between England and France. John's reversals in that conflict, as well as in other internal struggles in France, served to strengthen his duchy and to maintain its independence.His alternative regnal name, John VI, as he is known traditionally in old English sources, comes from English partisan accounting as to who was the rightful duke of Brittany during the War of the Breton Succession (1341–65), which had preceded the rule of his father. Read more on Wikipedia

Page views of John V, Duke of Brittanies by language

Among noblemen, John V, Duke of Brittany ranks 410 out of 843. Before him are Maria Theresa of Austria, Jacquetta of Luxembourg, Frederick August I, Duke of Oldenburg, Duchess Alexandra of Oldenburg, Princess Marina of Greece and Denmark, and Otto-William, Count of Burgundy. After him are Prince Ludwig Ferdinand of Bavaria, Beatrice of Silesia, Charles II Gonzaga, Duke of Nevers, Demetrius Zvonimir of Croatia, Louis Armand II, Prince of Conti, and Joseph Fesch.