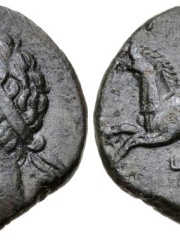 Masinissa (Numidian: , MSNSN; c. 238 BC – 148 BC: 180, 183 ), also spelled Massinissa, Massena and Massan, was an ancient Numidian king best known for leading a federation of Massylii Berber tribes during the Second Punic War (218–201 BC), ultimately uniting them into a kingdom that became a major regional power in North Africa. Much of what is known about Masinissa comes from the Livy's History of Rome, and to a lesser extent Cicero's Scipio's Dream. Read more on Wikipedia

Masinissa was a king of Numidia in North Africa. He was the son of the king Syphax and the Carthaginian princess Sophonisba. He became king of Numidia after his father was defeated by the Romans in the Second Punic War. He was a strong ally of Rome and helped them conquer Carthage.

Page views of Masinissas by language

Among politicians, Masinissa ranks 1,454 out of 15,577. Before him are Václav Klaus, Christian VI of Denmark, Chilperic I, Thomas Sankara, Alexander Farnese, Duke of Parma, and Walter Schellenberg. After him are Berengar I of Italy, Baldwin V of Jerusalem, Karađorđe, Robert Ley, Marie of Romania, and Kim Young-sam.

Others Deceased in 148 BC