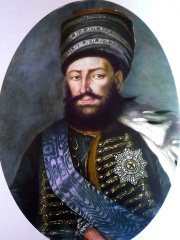 Heraclius II (Georgian: ერეკლე II), also known as Erekle II and The Little Kakhetian (Georgian: პატარა კახი [pʼɑtʼɑɾɑ kʼɑχi]) (7 November 1720 or 7 October 1721 [according to C. Toumanoff] – 11 January 1798), was a Georgian monarch of the Bagrationi dynasty, reigning as the king of Kakheti from 1744 to 1762, and of Kartli and Kakheti from 1762 until 1798. In the contemporary Persian sources he is referred to as Erekli Khan (ارکلی خان), while Russians knew him as Irakly (Ираклий). His name is frequently transliterated in a Latinized form Heraclius because both names Erekle and Irakli are Georgian versions of this Greek name.From being granted the kingship of Kakheti by his overlord Nader Shah in 1744 as a reward for his loyalty, to becoming the penultimate king of the united kingdoms of Kakheti and Kartli in eastern Georgia, his reign is regarded as the swan song of the Georgian monarchy. Read more on Wikipedia

Page views of Heraclius II of Georgias by language

Among politicians, Heraclius II of Georgia ranks 5,380 out of 15,577. Before him are Andris Bērziņš, Princess Wencheng, Alulim, Alexander Gorchakov, Najib Mikati, and Theudoald. After him are Karl Eusebius, Prince of Liechtenstein, Bohemond III of Antioch, Pothinus, Archduchess Adelheid of Austria, Girolamo Riario, and Sigurd the Crusader.