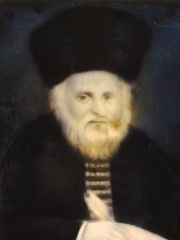 Elijah ben Solomon Zalman, (Hebrew: ר' אליהו בן שלמה זלמן‎ Rabbi Eliyahu ben Shlomo Zalman) known as the Vilna Gaon (Yiddish: דער װילנער גאון‎, Polish: Gaon z Wilna, Lithuanian: Vilniaus Gaonas) or Elijah of Vilna, or by his Hebrew acronym HaGra ("HaGaon Rabbenu Eliyahu": "The sage, our teacher, Elijah") or Elijah Ben Solomon Zalman (Sialiec, April 23, 1720 – Vilnius October 9, 1797), was a Talmudist, halakhist, kabbalist, and the foremost leader of misnagdic (non-hasidic) Jewry of the past few centuries. He is commonly referred to in Hebrew as ha-Gaon he-Chasid mi-Vilna, "the pious genius from Vilnius".Through his annotations and emendations of Talmudic and other texts, he became one of the most familiar and influential figures in the rabbinic study since the Middle Ages, counted by many among the sages known as the Acharonim, and ranked by some with the even more revered Rishonim of the Middle Ages. Read more on Wikipedia

Rabbi Elijah ben Shlomo Zalman, known as the Vilna Gaon, was a famous Talmudic scholar and the leader of the Mitnagdic Jewish community in the 18th century. He is most famous for his work on the Talmud, which he would study for hours each day.

Among religious figures, Vilna Gaon ranks 716 out of 2,272. Before him are Fatima al-Fihri, Jethro, Mahapajapati Gotami, Gregory Thaumaturgus, Thomas Wolsey, and Theophilus of Antioch. After him are Onesimus, Saint Marinus, Josephine Bakhita, Lars Levi Laestadius, Antipope Ursicinus, and Atiśa.

Among RELIGIOUS FIGURES In Belarus

Among religious figures born in Belarus, Vilna Gaon ranks 1. After him are Kirill of Turov (1130) and Aleksandr Kurlovich (1961).