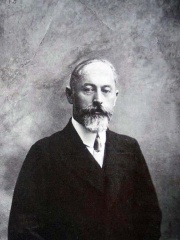 Noe Zhordania (Georgian: ნოე ჟორდანია /nɔɛ ʒɔrdɑniɑ/; Russian: Ной Никола́евич Жорда́ния; born January 14 [O.S. 2 January] 1868 (or 21 March [O.S. 9 March] 1869) — January 11, 1953) was a Georgian journalist and Menshevik politician. He played an eminent role in the socialist revolutionary movement in the Russian Empire, and later chaired the government of the Democratic Republic of Georgia from July 24, 1918 until March 18, 1921, when the Bolshevik Russian Red Army invasion of Georgia forced him into exile to France. Read more on Wikipedia

Among politicians, Noe Zhordania ranks 5,781 out of 15,710. Before him are Johan Ferrier, Nebuchadnezzar IV, Sahib I Giray, Johann Wilhelm, Duke of Saxe-Weimar, Marcus Manlius Capitolinus, and Al-Said Barakah. After him are Infante Gabriel of Spain, Vardan Mamikonian, Paul Durand-Ruel, Muhammad I Tapar, Frederick I, Duke of Austria, and John VIII, Count of Vendôme.