This page contains a list of the greatest French Companions. The pantheon dataset contains 673 Companions, 67 of which were born in France. This makes France the birth place of the 2nd most number of Companions.

The following people are considered by Pantheon to be the top 10 most legendary French Companions of all time. This list of famous French Companions is sorted by HPI (Historical Popularity Index), a metric that aggregates information on a biography’s online popularity. Visit the rankings page to view the entire list of French Companions. 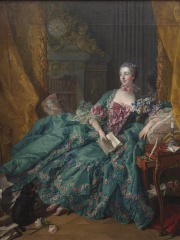 With an HPI of 77.16, Madame de Pompadour is the most famous French Companion.  Her biography has been translated into 56 different languages on wikipedia.

Jeanne Antoinette Poisson, Marquise de Pompadour (, French: [pɔ̃paduʁ] (listen); 29 December 1721 – 15 April 1764), commonly known as Madame de Pompadour, was a member of the French court. She was the official chief mistress of King Louis XV from 1745 to 1751, and remained influential as court favourite until her death.Pompadour took charge of the king's schedule and was a valued aide and advisor, despite her frail health and many political enemies. She secured titles of nobility for herself and her relatives, and built a network of clients and supporters. She was particularly careful not to alienate the Queen, Marie Leszczyńska. On 8 February 1756, the Marquise de Pompadour was named as the thirteenth lady-in-waiting to the queen, a position considered the most prestigious at the court, which accorded her with honors.Pompadour was a major patron of architecture and decorative arts, especially porcelain. She was a patron of the philosophes of the Enlightenment, including Voltaire. Hostile critics at the time generally tarred her as a malevolent political influence, but historians are more favorable, emphasizing her successes as a patron of the arts and a champion of French pride. Art historian Melissa Hyde argues that the critics of Pompadour were driven by fears over the overturning of social and gender hierarchies that Pompadour's power and influence, as a woman who was not born into the aristocracy, represented. 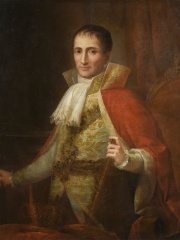 With an HPI of 74.38, Joseph Bonaparte is the 2nd most famous French Companion.  His biography has been translated into 63 different languages.

Joseph-Napoléon Bonaparte (born Giuseppe di Buonaparte, Italian: [dʒuˈzɛppe di ˌbwɔnaˈparte]; Corsican: Ghjuseppe Nabulione Bonaparte; Spanish: José Napoleón Bonaparte; 7 January 1768 – 28 July 1844) was a French statesman, lawyer, diplomat and older brother of Napoleon Bonaparte. During the Napoleonic Wars, the latter made him King of Naples (1806–1808), and then King of Spain (1808–1813). After the fall of Napoleon, Joseph styled himself Comte de Survilliers and emigrated to the United States, where he settled near Bordentown, New Jersey, on an estate overlooking the Delaware River not far from Philadelphia. 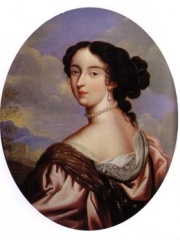 With an HPI of 73.05, Françoise d'Aubigné, Marquise de Maintenon is the 3rd most famous French Companion.  Her biography has been translated into 38 different languages.

Françoise d'Aubigné (27 November 1635 – 15 April 1719), known first as Madame Scarron and subsequently as Madame de Maintenon (French: [madam də mɛ̃t(ə)nɔ̃] (listen)), was a French noblewoman who secretly married King Louis XIV. Although she was never considered queen of France, she was one of the King's closest advisers and the royal children's governess. In 1686, she founded the Maison royale de Saint-Louis, a school for girls from poorer noble families. 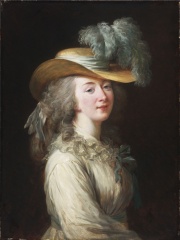 With an HPI of 72.65, Madame du Barry is the 4th most famous French Companion.  Her biography has been translated into 43 different languages.

Jeanne Bécu, Comtesse du Barry (19 August 1743 – 8 December 1793) was the last maîtresse-en-titre of King Louis XV of France. She was executed, by guillotine, during the French Revolution due to accounts of treason—particularly being suspected of assisting émigrés flee from the Revolution. In order for the king to take Jeanne as a maîtresse-en-titre, she had to be married to someone of high rank so she could be allowed at court; she was hastily married on 1 September 1768, to Comte Guillaume du Barry. The marriage ceremony was accompanied by a false birth certificate, created by Jean du Barry. The certificate made Jeanne younger by three years and dissimulated her “poor” background. Henceforth, she was deemed as an official maîtresse-en-titre to the king.Her arrival at the French royal court was considered scandalous by some, as she had been a prostitute and a commoner. For these reasons, she was disliked by many, including Marie Antoinette. Marie Antoinette's disfavoring Jeanne and refusing to speak to her was seen as a major issue within the royal court and had to be resolved. In New Year's Day 1772, Marie Antoinette remarked to Jeanne, “There are many people at Versailles today.” This little interaction pleased both Jeanne and the royal court, and the dispute ended, though the latter still disapproved of Jeanne thereafter. During the Reign of Terror, a subpart of the French Revolution, Jeanne was imprisoned due to accounts of treason, the claims being made by her page Zamor. Soon after her imprisonment, she was executed—by guillotine—on 8 December 1793. Her body was buried in the Madeleine cemetery. The gems she had smuggled out of France during the Revolution were found due to her confession, and were sold at in auction in 1795. 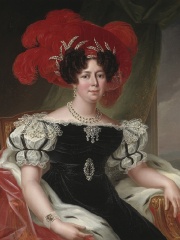 With an HPI of 71.43, Désirée Clary is the 5th most famous French Companion.  Her biography has been translated into 44 different languages.

Bernardine Eugénie Désirée Clary (Swedish: Eugenia Bernhardina Desideria; 8 November 1777 – 17 December 1860) was Queen of Sweden and Norway from 5 February 1818 to 8 March 1844 as the wife of King Charles XIV John. Charles John was a former French general and founder of the House of Bernadotte. Désirée Clary was the mother of Oscar I, and one-time fiancée of Napoleon Bonaparte. She officially changed her name in Sweden to Desideria but did not use the name herself. 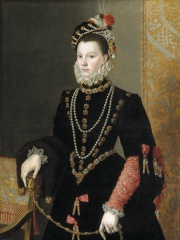 With an HPI of 70.83, Elisabeth of Valois is the 6th most famous French Companion.  Her biography has been translated into 42 different languages.

Elisabeth of France or Elisabeth of Valois (Spanish: Isabel de Valois; French: Élisabeth de France) (2 April 1545 – 3 October 1568) was Queen of Spain as the third spouse of Philip II of Spain. She was the eldest daughter of Henry II of France and Catherine de' Medici. 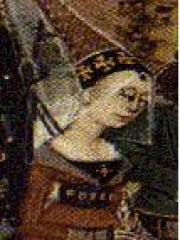 With an HPI of 70.49, Isabella of France is the 7th most famous French Companion.  Her biography has been translated into 47 different languages.

Isabella of France (c. 1295 – 22 August 1358), sometimes described as the She-Wolf of France (French: Louve de France), was Queen of England as the wife of King Edward II, and regent of England from 1327 until 1330. She was the youngest surviving child and only surviving daughter of Philip IV of France and Joan I of Navarre. Isabella was notable in her lifetime for her diplomatic skills, intelligence, and beauty. She overthrew her husband, becoming a "femme fatale" figure in plays and literature over the years, usually portrayed as a beautiful but cruel and manipulative figure. Isabella arrived in England at the age of 12 during a period of growing conflict between the king and the powerful baronial factions. Her new husband was notorious for the patronage he lavished on his favourite, Piers Gaveston, but the queen supported Edward during these early years, forming a working relationship with Piers and using her relationship with the French monarchy to bolster her own authority and power. After the death of Gaveston at the hands of the barons in 1312, however, Edward later turned to a new favourite, Hugh Despenser the Younger, and attempted to take revenge on the barons, resulting in the Despenser War and a period of internal repression across England. Isabella could not tolerate Hugh Despenser, and by 1325, her marriage to Edward was at a breaking point. Travelling to France on a diplomatic mission, Isabella may have begun an affair with Roger Mortimer, and the two may possibly have agreed at this point to depose Edward and oust the Despenser family. The Queen returned to England with a small mercenary army in 1326, moving rapidly across England. The King's forces deserted him. Isabella deposed Edward, becoming regent on behalf of her young son, Edward III. Some believe that Isabella then arranged the murder of Edward II. Isabella and Mortimer's regime began to crumble, partly because of her lavish spending, but also because the Queen successfully, but unpopularly, resolved long-running problems such as the wars with Scotland. In 1330, aged 18, Edward III forcibly asserted his authority. Mortimer was executed, Isabella's regency was ended and she was imprisoned. Released after two years, she afterward lived in considerable style; though she did not reside at court, she often visited to see her grandchildren. 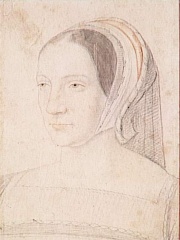 With an HPI of 70.19, Claude of France is the 8th most famous French Companion.  Her biography has been translated into 41 different languages.

Claude of France (13 October 1499 – 20 July 1524) was Queen of France by marriage to King Francis I. She was also ruling Duchess of Brittany from 1514 until her death in 1524. She was a daughter of King Louis XII of France and his second wife, the duchess regnant Anne of Brittany. 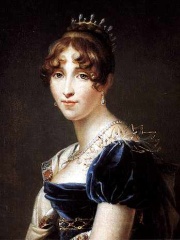 With an HPI of 68.65, Hortense de Beauharnais is the 9th most famous French Companion.  Her biography has been translated into 36 different languages.

Hortense Eugénie Cécile Bonaparte (French pronunciation: ​[ɔʁtɑ̃s øʒeni sesil bɔnapaʁt]; née de Beauharnais, pronounced [də boaʁnɛ]; 10 April 1783 – 5 October 1837) was Queen consort of Holland. She was the stepdaughter of Emperor Napoléon I as the daughter of his first wife, Joséphine de Beauharnais. Hortense later married Napoléon I’s brother, Louis Bonaparte, who had been made King of Holland, making her her stepfather’s sister-in-law. She was the mother of Napoléon III, Emperor of the French; Louis II of Holland; and Napoléon Louis Charles Bonaparte who died at the age of four. She also had an illegitimate son, Charles, Duke of Morny, with her lover, the Comte de Flahaut. 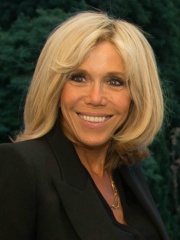 With an HPI of 68.36, Brigitte Macron is the 10th most famous French Companion.  Her biography has been translated into 39 different languages.

Brigitte Marie-Claude Macron (French: [bʁiʒit maʁi klod makʁɔ̃]; née Brigitte Trogneux [tʁɔɲø], previously Auzière [ozjɛːʁ]; born 13 April 1953) is a French former educator. She is the wife and former teacher of Emmanuel Macron, who is the current President of France and Co-Prince of Andorra.

Pantheon has 67 people classified as companions born between 545 and 1976. Of these 67, 4 (5.97%) of them are still alive today. The most famous living companions include Brigitte Macron, Vanessa Paradis, and Bernadette Chirac. The most famous deceased companions include Madame de Pompadour, Joseph Bonaparte, and Françoise d'Aubigné, Marquise de Maintenon. As of April 2022, 8 new companions have been added to Pantheon including Catherine of France, Countess of Charolais, Camille Doncieux, and Éléonore Desmier d'Olbreuse.

Which Companions were alive at the same time? This visualization shows the lifespans of the 15 most globally memorable Companions since 1700.