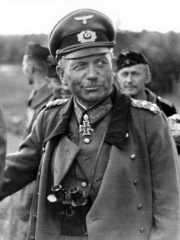 Heinz Wilhelm Guderian (German: [ɡuˈdeːʁi̯an]; 17 June 1888 – 14 May 1954) was a German general during World War II who, after the war, became a successful memoirist and self-promoter. An early pioneer and advocate of the "blitzkrieg" approach, he played a central role in the development of the panzer division concept. Read more on Wikipedia

Heinz Guderian is most famous for being a German general who was the architect of the Blitzkrieg, or the lightning war.

Among military personnels, Heinz Guderian ranks 16 out of 1,466. Before him are Adolf Eichmann, William Wallace, Chiang Kai-shek, Themistocles, Khalid ibn al-Walid, and Cao Cao. After him are Erich von Manstein, Prince Eugene of Savoy, Pyrrhus of Epirus, Ptolemy I Soter, Wilhelm Keitel, and Friedrich Paulus.