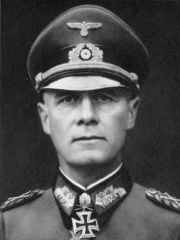 Johannes Erwin Eugen Rommel (15 November 1891 – 14 October 1944) was a German general and a propaganda icon during World War II. Popularly known as the Desert Fox, he served as field marshal in the Wehrmacht (armed forces) of Nazi Germany, as well as serving in the Reichswehr of the Weimar Republic, and the army of Imperial Germany. Rommel was a highly decorated officer in World War I and was awarded the Pour le Mérite for his actions on the Italian Front. In 1937, he published his classic book on military tactics, Infantry Attacks, drawing on his experiences in that war. Read more on Wikipedia

Since 2007, the English Wikipedia page of Erwin Rommel has received more than 8,786,549 page views. His biography is available in 85 different languages on Wikipedia (up from 79 in 2019). Erwin Rommel is the 7th most popular military personnel (up from 9th in 2019), the 32nd most popular biography from Germany (up from 33rd in 2019) and the most popular German Military Personnel.

Erwin Rommel was a German Field Marshal who is most famous for his role in the North African Campaign of World War II. He was a highly decorated officer in the Wehrmacht, and was awarded the German Cross in Gold and the Knight's Cross of the Iron Cross with Oak Leaves, Swords, and Diamonds.

Among military personnels, Erwin Rommel ranks 7 out of 1,466. Before him are Genghis Khan, Alexander the Great, Joan of Arc, Timur, Spartacus, and Charles de Gaulle. After him are Karl Dönitz, Charles Martel, Adolf Eichmann, William Wallace, Chiang Kai-shek, and Themistocles.