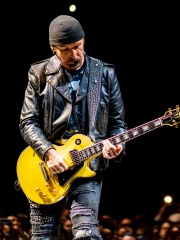 David Howell Evans (born 8 August 1961), better known by his stage name the Edge (or simply Edge), is a British-born Irish musician and songwriter best known as the lead guitarist, keyboardist, and backing vocalist of the rock band U2. A member of the group since its inception, he has recorded 14 studio albums with them as well as one solo record. Read more on Wikipedia

Since 2007, the English Wikipedia page of The Edge has received more than 2,487,863 page views. His biography is available in 44 different languages on Wikipedia making him the 599th most popular musician.

Page views of The Edges by language

Among musicians, The Edge ranks 599 out of 2,258. Before him are Ray Brown, Horace Silver, Euronymous, Jim Hall, Mitch Mitchell, and Steve Howe. After him are Rudolf Kempe, Maceo Parker, T-Bone Walker, Jeff Lynne, Herb Alpert, and Xaver Scharwenka.