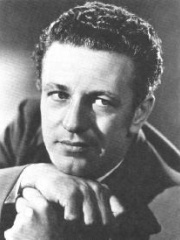 Nicholas Ray (born Raymond Nicholas Kienzle Jr., August 7, 1911 – June 16, 1979) was an American film director, screenwriter, and actor best known for the 1955 film Rebel Without a Cause. He is appreciated for many narrative features produced between 1947 and 1963 including They Live By Night, In A Lonely Place, Johnny Guitar, and Bigger Than Life, as well as an experimental work produced throughout the 1970s titled We Can't Go Home Again, which was unfinished at the time of Ray's death. Ray's compositions within the CinemaScope frame and use of color are particularly well-regarded and he was an important influence on the French New Wave, with Jean-Luc Godard famously writing in a review of Bitter Victory, "... Read more on Wikipedia

Nicholas Ray is most famous for directing Rebel Without a Cause, a film about the American teenager.