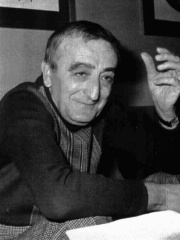 Mario Bava (31 July 1914 – 25 April 1980) was an Italian filmmaker who worked variously as a director, cinematographer, special effects artist and screenwriter, frequently referred to as the "Master of Italian Horror" and the "Master of the Macabre". His low-budget genre films, known for their distinctive visual flair and stylish technical ingenuity, feature recurring themes and imagery concerning the conflict between illusion and reality, as well as the destructive capacity of human nature.After providing special effects work and other assistance on productions like Hercules (1958) and Caltiki – The Immortal Monster (1959), Bava made his official feature directorial debut with the horror film Black Sunday, released in 1960. Read more on Wikipedia

Mario Bava is most famous for his work on gothic horror films such as Black Sunday, Black Sabbath, and The Mask of Satan.