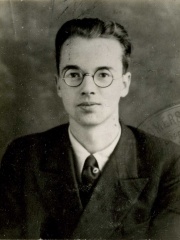 Klaus Emil Julius Fuchs (29 December 1911 – 28 January 1988) was a German theoretical physicist and atomic spy who supplied information from the American, British and Canadian Manhattan Project to the Soviet Union during and shortly after World War II. While at the Los Alamos National Laboratory, Fuchs was responsible for many significant theoretical calculations relating to the first nuclear weapons and, later, early models of the hydrogen bomb. After his conviction in 1950, he served nine years in prison in the United Kingdom, then migrated to East Germany where he resumed his career as a physicist and scientific leader. The son of a Lutheran pastor, Fuchs attended the University of Leipzig, where his father was a professor of theology, and became involved in student politics, joining the student branch of the Social Democratic Party of Germany (SPD), and the Reichsbanner Schwarz-Rot-Gold, the SPD's paramilitary organisation. Read more on Wikipedia

Klaus Fuchs was a German physicist who was convicted of spying for the Soviet Union in the 1940s. He was a member of the British team that worked on the Manhattan Project to develop the atomic bomb. He was arrested in 1950 and sentenced to 14 years in prison.