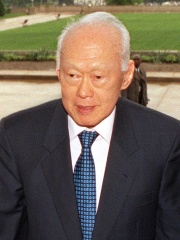 Lee Kuan Yew (English: [liː kwan juː]) (born Harry Lee Kuan Yew; 16 September 1923 – 23 March 2015), often referred to by his initials LKY, was a Singaporean politician and lawyer who served as the founding and the first Prime Minister of Singapore from 1959 to 1990 after winning from the 1959 general election to 1988 general election. As one of the founding members of the People's Action Party, Lee is recognised as the nation's founding father, credited with rapidly transitioning the country from a "developing third world country into a developed first world country within a single generation" under his leadership. Lee died of pneumonia on 23 March 2015, aged 91. Read more on Wikipedia

Lee Kuan Yew is most famous for his role in Singapore's independence. He was the first Prime Minister of Singapore from 1959 to 1990.

Among politicians, Lee Kuan Yew ranks 281 out of 15,710. Before him are Elagabalus, Wu Zetian, Julian, Golda Meir, Khafra, and Edward II of England. After him are Bill Clinton, Herod Antipas, Jacques Chirac, Charles VIII of France, Eva Perón, and Xi Jinping.