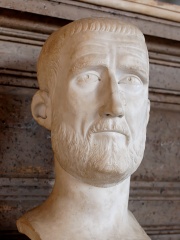 Marcus Aurelius Probus (; 19 August 232 – September 282) was Roman emperor from 276 to 282. Probus was an active and successful general as well as a conscientious administrator, and in his reign of six years he secured prosperity for the inner provinces while withstanding repeated invasions of barbarian tribes on almost every sector of the frontier.After repelling the foreign enemies of the empire Probus was forced to handle several internal revolts, but demonstrated leniency and moderation to the vanquished wherever possible. In his reign the facade of the constitutional authority of the Roman Senate was fastidiously maintained, and the conqueror, who had carried his army to victory over the Rhine, professed himself dependent on the sanction of the Senate.Upon defeating the Germans, Probus re-erected the ancient fortifications of emperor Hadrian between the Rhine and Danube rivers, protecting the Agri Decumates, and exacted from the vanquished a tribute of manpower to resettle depopulated provinces within the empire and provide for adequate defense of the frontiers. Read more on Wikipedia

Page views of Probuses by language

Among politicians, Probus ranks 1,031 out of 15,710. Before him are Agrippina the Elder, Demetrius I of Macedon, Emperor Wu of Jin, Richard Cromwell, Zachary Taylor, and Jalal Talabani. After him are Abdullah I of Jordan, 5th Dalai Lama, Jean Monnet, Frederick V of Denmark, Grover Cleveland, and Nestor.