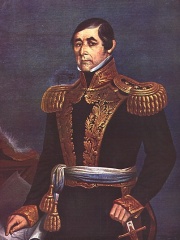 José Fructuoso Rivera y Toscana (17 October 1784 – 13 January 1854) was a Uruguayan general and patriot who fought for the liberation of Banda Oriental from Brazilian rule, twice served as Uruguay's President and was one of the instigators of the long Uruguayan Civil War. He is also considered to be the founder of the Colorado Party, which ruled Uruguay without interruption from 1865 until 1958. Read more on Wikipedia

Among politicians, Fructuoso Rivera ranks 8,249 out of 15,710. Before him are Ashikaga Yoshinori, Odo II, Duke of Burgundy, Ali Hassan Mwinyi, Stephan Burián von Rajecz, Franz von Sickingen, and Peng Zhen. After him are Sabinianus, Bolesław the Pious, George I, Landgrave of Hesse-Darmstadt, Ernest, Margrave of Austria, Korbinian Brodmann, and Thomas A. Hendricks.