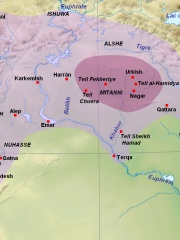 Shuttarna II (or Šuttarna) was a king of the Hurrian kingdom of Mitanni in the early 14th century BC.Shuttarna was a descendant and probably a son of the great Mitannian king Artatama I. He was an ally of the Egyptian Pharaoh Amenhotep III and the diplomatic dealings of the kings are briefly recorded in the Amarna letters. Shuttarna's daughter Kilu-Hepa (sometimes spelled Gilukhepa) was given to Amenhotep III in marriage to seal the alliance between the two royal houses in the Pharaoh's 10th regnal year, taking with her a great dowry. During the reign of Shuttarna, the kingdom of Mitanni reached its height of power and prosperity. Read more on Wikipedia

Among people born in 1350 BC, Shuttarna II ranks 6. Before him are Tudhaliya II, Zannanza, Tudhaliya III, Ḫattušili II, and Iset. After him are Nebetah, Shuttarna III, Shattuara, and Artashumara. Among people deceased in 1375, Shuttarna II ranks 8. Before him are Valdemar IV of Denmark, Philip, Duke of Orléans, Stephen II, Duke of Bavaria, Ibn al-Shatir, Eleanor of Sicily, and John Henry, Margrave of Moravia. After him is Margaret Drummond, Queen of Scotland.